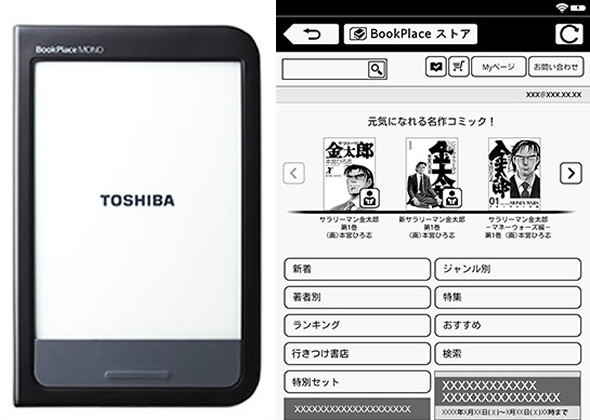 Toshiba Japan, on 4th April, announced to restart its e-bookstore and more importantly introduced an e-book reader called “BookPlace Mono” which looks like Amazon’s Kindle e-reader. The eBook reader terminal is equipped with E Ink 6” electronic paper (758 × 1024 pixels). The dimensions of the reader are: 170x110x11 mm (HxWxD) and weighs in at 180g. It’s got an 800MHz Freescale i.MX508 CPU with a RAM of 512MB. It uses WiFi (IEEE802.11b/g/n) for communication and has 4GB internal memory with a Micro SD/SDHC car slot. The reader has a headphone jack with a Micro USB port.


The reader has a text-to-speech functionality by utilizing “TOSHIBA Speech Synthesis”. The company claims that battery life of the reader is enough to turn 8000 pages. But the e-reader will not be available in electronic stores, but sold through a syndicate of bookstores for 30,000 Yen (US$313) with a set of three comics.