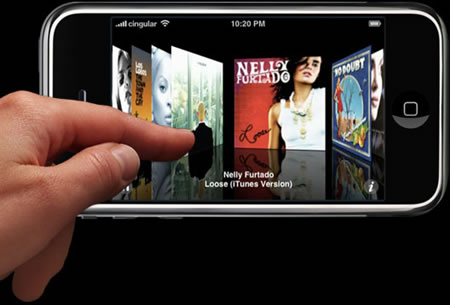 Top 5 Technical drawbacks of the iPhone

Never before has the launch of a mobile phone generated so much buzz than with the iPhone which marks Apple’s entry into the cell phone market. Steve Jobs has high hopes for the iPhone and plans to capture 1 % of the mobile phone market which may seem small, but it is not as 1 billion handsets were sold last year which would mean 10 million iPhones, not to mention that it is an expensive phone at $ 499. Coming back to the topic here are the Top 5 technical drawbacks of the iPhone.
5) 2 Megapixel camera – Apple did put all the latest stuff from accelerometers to light sensors then why stick to a dated 2 Megapixel sensor when its main rival the Nokia N95 sports a 5 Megapixel camera.
4) Battery Life – It is much obvious that when you have the slimmest smartphone with a huge touchscreen battery life is going to be a problem. 5 hours of talktime is not the lowest in the class as it still beats the Motorola Q but it will surely be a turn off for heavy users.
3) No Expansion slot – 8 GB is a lot of memory but sometimes we cant get enough of it as you wont be deleting “Lost” to accomodate some new movie this is when a Memory card comes in the picture.
2) No 3G – Sure it does has EDGE and Wi-Fi but adding UMTS or HSCSD would not hurt either.
(No 1 after the jump)

1) Non Removable battery – Apple’s tradition of non-removable battery continues with the iPhone. Mr Jobs we know that Mac OS X is pretty stable but it is definitely not perfect so what do we do if the phone freezes, as removing the battery is the only option to get it started again. Smartphones are prone to such problems and as you start filling up the onboard memory the chances of the phone freezing increase dramatically.
Apple has not yet disclosed vital information like what kind of Processor it has, what speed it runs on and the amount of RAM in it.