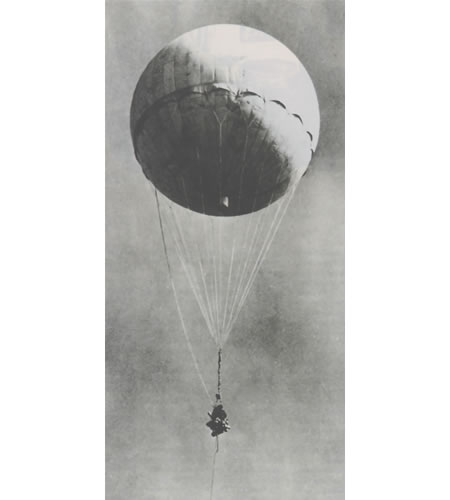 Top 10 Strangest Weapons of all times

We have come a long way from the Flint-Knapping process where the pre-historic man fashioned weapons out of stone. The Early Humans used five main kinds of flint tools (or weapons)- knives for cutting, scrapers for removing flesh from hides, burins for carving awls for piercing holes and points or tips to fix on top of arrows. Hand axes were used as well for chopping tress. It’s ironic that as we have progressed and climbed the evolution ladder we have developed more new weapons only to harm fellow humans. Here is a chronicle of some interesting weapons used in our times, in a random order.
No 10 – Dolphins as weapons
The Navy explored the possibilities of using marine mammals in the early 1960s, when military researchers noticed how sea mammals’ highly developed senses, such as the dolphins’ sonar, could be exploited to locate mines and do other underwater tasks. The dolphins were used in the used in the 1970s during the Vietnam War and in the late 1980s; six Navy dolphins patrolled the Bahrain harbor to protect U.S. ships from enemy swimmers and mines. They also were used to escort Kuwaiti oil tankers through potentially dangerous waters. In 1989, the Navy started the Cetacean Intelligence Mission. They fitted the dolphins with harness and electrodes, and teaching them to protect Trident subs in harbor. They were taught to avoid touching the mines, which might cause them to explode. 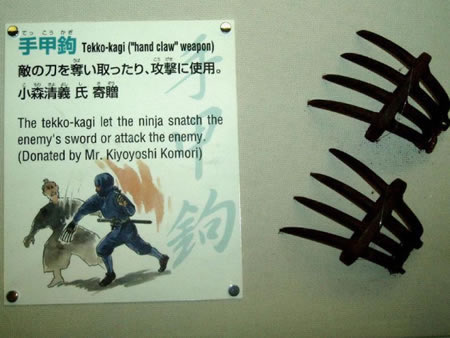 No 9 – The Tekko-kagi or hand claws
A weapon of the Japanese Ninja, the Tekko-kagi was an integral part of his ensemble. This weapon also aided him in climbing walls and barriers. An iron claw worn on the back of the hand, this weapon also helped against sword attacks. The ninja also carried a Kunai for digging in hard soil and making holes in mud walls and Saku for picking locks. Characteristically made from aluminum, steel, iron or wood, tekko weapons are believed to have created when the Bushi in Okinawa, Japan began wielding the steel shoes of their horses as a means of self-defense against assailants. 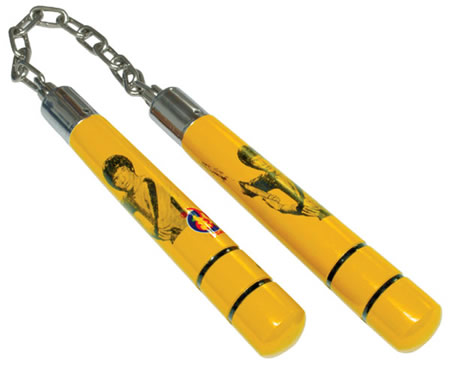 No 8 – The Nunchaku
Epitomized by Bruce Lee and Jackie Chan, this Karate self defense weapon is an example of simple mechanics and muscle-power. The Nunchaku has two short sticks, about the length of ones forearm, bound together at one end. When literally translated, the Nunchaku means, “double restrained sticks”. Its origin dates back to Okinawan’s time. It is very easy to conceal this weapon, especially in more traditional outfits of the ancient Eastern world. Watching a novice practice this art can be quite comical because of the lack of co-ordination that leads to bruised noses and elbows alike. 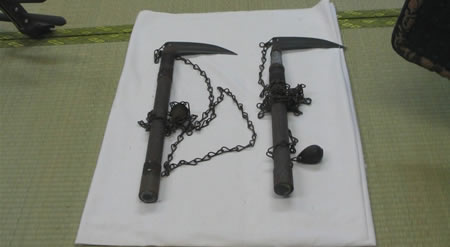 No 7 – The Kusari-gama
Another Japanese weapon to make the mark is the Kusari-gama. It is made up of kama or the sickle on a metal chain with a heavy iron weight at the end. The art of handling the Kusarigama is called Kusarigamajutsu. The ninja would attack his opponent by swinging the weighted chain in a large circle over his head, and then whipping it forward to entangle an opponent’s weapon, or immobilizing him and the rush forwards to attack with the sickle. It is believed that tis weapon was extremely popular in feudal Japan, with many schools teaching it, from about the 12th to 17th Century. 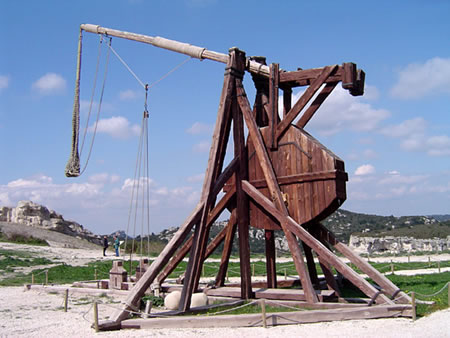 No 6 – The Trebuchet
The Chinese invented the Trebuchet as well as gunpowder. Using the principles of counterweight, it gained popularity as a medieval siege engine. All of them were made of wood but were sturdy enough to fling three hundred pound (140 kg) projectiles at high speeds into enemy fortifications. Used by both Christian and Muslim warriors in the Mediterranean region in the twelfth century, they often used to fling disease-infected corpses into the enemy territory to infect them 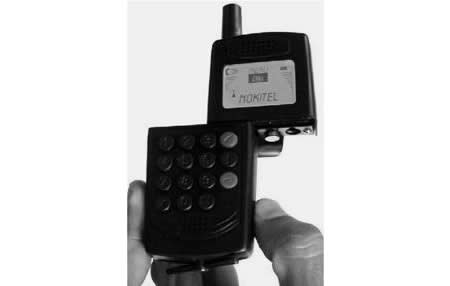 No 5 – Zip Guns
A crude and improvised firearm is termed as a Zip Gun. They usually are improvised handguns. They are almost always single-shot, and may be destroyed by the act of firing. Zip guns are usually smoothbore. However multiple shot zip guns do exist. Sometime in 2000, European police come across a four shot .22 LR zip gun disguised as a cellphone, where different keys on the keypad fire different barrels. Due to this enlightenment cellphones are now x-rayed by airport screeners worldwide. It is believed that such guns are being manufactured in Croatia. Even large bolt screws have been improvised into Zip guns. 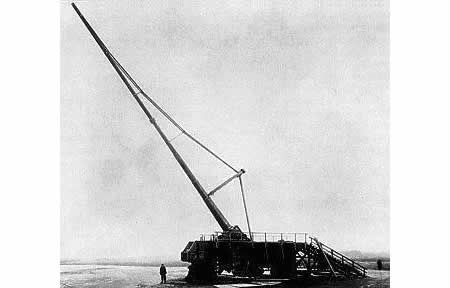 No 4 – The Paris Gun
Though often confused with Big Bertha, the howitzer used by the Germans, The Paris Gun was more known for the terror that it caused rather than the destruction by its mortar shells. The Germans used this gun during the World War I to instill psychological fear amongst the Parisians. The gun was also known as the ” Kaiser Wilhelm Geschütz” (“Emperor William Gun”), and was destroyed before the Allied forces could capture it. For military combat this gun was so a great success: the payload was very small, the barrel had to be regularly replaced, and the accuracy was only good enough for city-sized targets.

No 3 – The Goliath tracked mine
After recovering a prototype of a miniature-tracked vehicle developed by the French vehicle designer Adolphe Kégresse, Germany’s Wehrmacht’s ordnance office instructed the Borgward automotive company to make something similar. The purpose of the vehicle was ro carry a minimum of 50 kg of explosives. Eventually the company developed the SdKfz. 302 ( Sonderkraftfahrzeug, ‘special-purpose vehicle’), called the Leichter Ladungsträger (‘light demolitions carrier’), or Goliath, which carried 60 kg of explosives. The highlight was that Goliath could be steered remotely via a joystick control box. The control box was attached to the Goliath by a triple-strand telephone cable connected to the rear of the vehicle. Quite a cool RC vehicle!
No 2 – The FP-45 Liberator 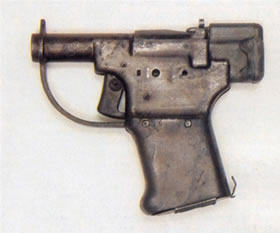 Another psychological warfare weapon to be used during the troubled times of World War II was the FP-45 Liberator. Manufactured by the Inland Guide Lamp Manufacturing Division of the General Motors Corporation, it was commissioned for the United States military services. The army had designated the weapon as the Flare Projector Caliber .45 hence the name FP-45. This was done to hide the fact that a pistol was being mass-produced. A crude and clumsy weapon, the Liberator was never intended for front-line service, it was intended as an insurgency weapon.

No 1 – Japanese Vengeance Balloon Bombs
To cause mayhem and destruction during the Word War II, Japan came up with an ingenious idea in the form of the Japanese Vengeance Balloon Bombs. The Japanese hoped that the easterly wintertime jet stream winds could carry these explosive balloons to the forested regions of the Pacific Northwest and initiate large forest fires. The idea behind this exercise was to divert the attention of the U.S. military homewards, to tackle forest fires and leave the battle arena. The balloons were fashioned from mulberry paper, glued together with potato flour and filled with expansive hydrogen. This was one of the times in history when the media helped the government by hushing up the matter so that there would be no panic amongst the citizens and the Japanese would abandon the exercise. The balloons were found in Alaska, Washington, Oregon, California, Arizona, Idaho, Montana, Utah, Wyoming, Colorado, Texas, Kansas, Nebraska, South Dakota, North Dakota, Michigan and Iowa, as well as Mexico and Canada.