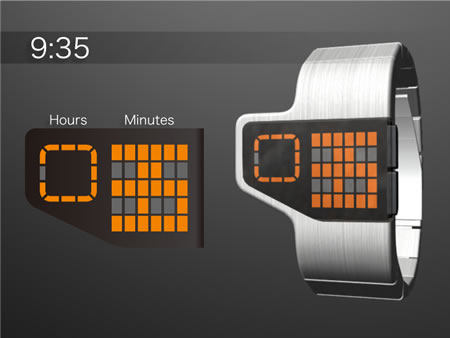 Watches are getting increasingly more fascinating in this the 21st century. I’m not sure if ‘fascinating’ is the appropriate term though, maybe ‘arty’ or even ‘complicated’ would be a better choice. Tokyoflash’s is a Japanese company that just loves designing odd looking watches that look like they should be framed and hung from a collector’s wall instead of worn on the wrist like their Kisai Broke watch. One of their latest is the Gridlock watch which is another weird looking wrist watch that looks like it would summon the Batmobile or K.I.T.T. rather than tell you what the time is. One portion shows you the hours by depicting them in a circular grid. The larger part shows of the minutes in large digital numerals. It’s not all that easy to see at first until you focus properly. You’ll then notice the two numbers side by side with virtually no gap in between. It’s simple yet I do believe they could have made it just a little clearer.