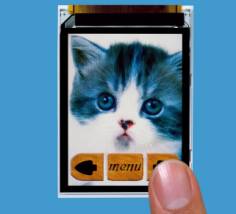 Since the finger shadow sensing input function is integrated directly into the display, without any additional input devices, the result is a thinner, lighter and more compact package with high reliability.
The LTPS TFT LCD prototype is aimed to be used in mobile phone applications. The display has faster switching speeds, greater photo-sensor sensitivity and more precise control of the input signal than conventional displays.