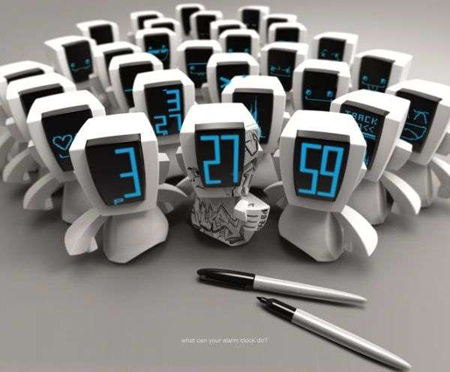 Kids hate their alarm clocks. It’s the one thing that steals away one of those rare childhood fantasies, of hitting the bed late and being there till its noon. But the alarm clock is a nuisance that brings the real world scenario into picture. That’s why we have the Throwie Digital Alarm Clock that will be such a good companion that no kid would ever consider taking its name literally. Ideally, it is named so after the graffiti artists, who have to throw color onto their splendorous canvases. So, the Throwie Digital Alarm Clock will look like a robot and have a permanent marker so that they can doodle on the clock and personalize it.

The clock also manages to pack a music player into it to keep you entertained till your eyelids are as heavy as mine are right now. It’s still a concept and one we hope to see in the open soon.
TrendHunter