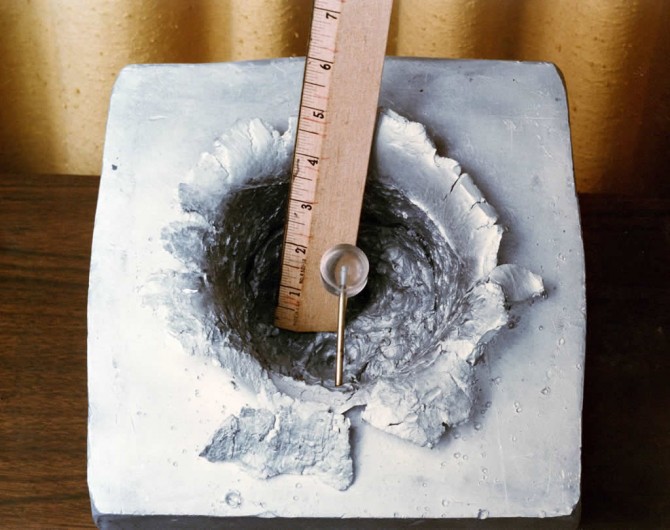 This is the crater a 1 gram object leaves travelling at the ISS Orbital speed (23,000 ft/sec) in a solid block of aluminium

Hollywood flicks Armageddon and Deep Impact predicted the doom of mankind by state sized asteroids hitting earth. It was not the size of the rock that mattered but it was the speed which would create an impact that could create tidal waves to engulf cities and dust clouds which would leave the planet in total darkness for years to come. Nothing gives a better idea of the impact that speed has than this picture below. The crater is caused by a mere 1 gram object (a penny weighs 2.5 grams), and from the looks of it, the crater is 5 – 6 inches wide and 4 inches deep. Mind you this is a solid aluminium block the same material which is used in aircraft manufacturing and forms the chassis of $100,000 sports cars.


Looking at the damage I think it would be safe to assume that if Mister Sulu punches the Warp drive and at those speeds an asteroid the size of a tennis ball were to hit the ship it could tear apart the entire USS Enterprise? Maybe or maybe not as with time we would be discovering and inventing exotic metals and materials which would be much more stronger to withstand the impact of perils of high speed space travel.

Ronald Reagan had proposed a program to develop Kinetic weapons which included Satellite interceptors to use high-velocity, watermelon-sized, teardrop-shaped projectiles to destroy Intercontinental missiles fired at the US. Needless to say it did not take off, the above video is from the movie GI.Joe Retaliation where Zartan fires a Tungsten rod from a space launch platform which hits London at hypersonic velocity and obliterates the city.