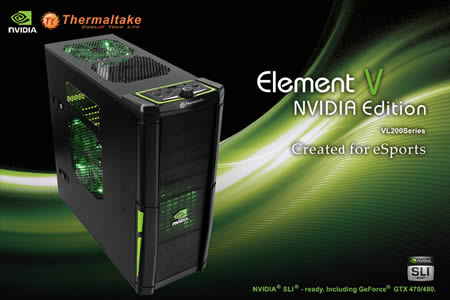 Thermaltake has announced the world’s one and only NVIDIA certified full-tower chassis for next-generation ultra-high performance graphics cards, the Thermaltake Element V NVIDIA Edition. This baby has support for the latest NVIDIA GeForce GTX 480 and GTX 470 GPUs with the additional support for eATX form factor motherboards as well. It’s specifically designed to offer the hardcore PC gamer low-noise operation and the bottom mounted power supply cage enables thermal management to accelerate hot air removal keeping the heat at bay. It also features – 11 5.25” drive bays that can be configured to support up to six 3.5” hard disks and one 2.5” hard disk or Solid State Disk (SSD). The Plug&Play side panel fan eliminates the need to physically connect the power connector to allow users to open up the side panel for maintenance or upgrade without having to worry about the wiring. The built-in thermal control system with pre-wired fans allows to easily control the speed of the fan, as well as color of the included Colorshift LED light effects.