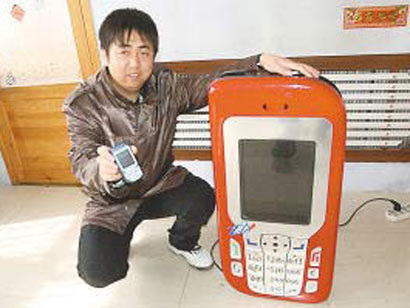 Taking the evolution of mobile phones backwards is Dan from China a dude with too much spare time in his hands. Dan actually built a 3 foot tall mobile phone which actually works. It weighs in at 3 pounds has a 18 – 20 inch wide screen, supports Internet access, text messaging and but of course you can make and receive phone calls. It also has a camera but taking snaps from this behemoth would be a tiring task. Tan was wise enough not to include a vibration mode as then all his neighbours or half the building would know of an incoming call. Apparently from the picture it seems that the phone lacks a battery and is powered by the mains.
Telling the City Evening News that it took 1 1/2 years to construct. He went on to say, “Many friends worried I couldn’t finish it, and only my father encouraged me to continue.” “The neighbors were always knocking on my door asking what was going on with all the noise from the apartment, and even my wife was complaining.”
(One more image after the jump) 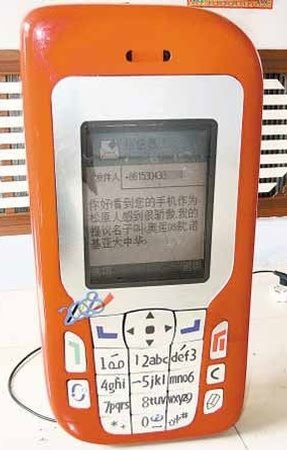