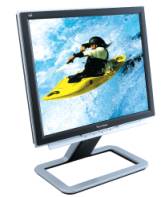 ViewSonic yesterday announced the release of a 2ms LCD monitor for the China market, with the company claiming it to be the world’s fastest LCD monitor. The new 19-inch model (VX922) is priced at 4,222 yuan (US$521) and has a native resolution of 1280×1024, a contrast ratio of 650:1 and features a brightness of 270 nits. ViewSonic shipped more than 1.1 million monitors in China in the first three quarters of this year. The company predicts total monitor shipments in China will total 10-11 millions units for the industry this year, with the ratio of LCD monitors to CRT monitors reaching 4:6. Via – Digitimes