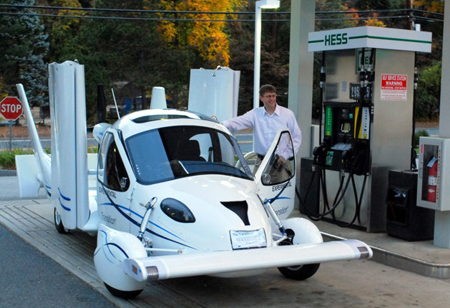 The Terrafugia Transition aircraft gets DOT approval for terrestrial drives

So, just the other day we spoke about the whole irony of being in a future, that isn’t packed with flying cars and now we have one that’s to stay. The Terrafugia Transition aircraft is no alien to our attention. And it’s all good to hear about it again, now that it is legally drive-worthy, as per the approvals by US Department of Transport’s (DOT) National Highway Traffic Safety Administration. This is a huge move for the agency since it has made special exceptions for the vehicles missing electronic stability system and airbags, as well as the polycarbonate windows that are lighter than regular glass to avoid great crashes and cracks that block a driver’s vision.

The price of the Terrafugia Transition aircraft is said to float around $250,000, that 41% more than what was earlier the price. There are a few other things that the vehicle has to combat in mid-drift but I think it shall prevail.
BusinessInsider