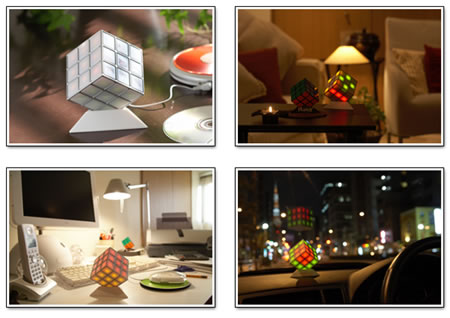 The Rubik Cube is back from the 80’s thanks to Japan based Megahouse corp. However this Japanese gizmo is not a puzzle but a speaker, just connect your MP3 player to it and watch the cube mersmerize you with the 27 or so odd designs as each square lights up in red/green/orange color. You will never get bored as the design patterns change according to the tempo of the music. It has three built in tunes and can be powered via the AC adapter or batteries. The light patterns are so attractive that you wont mind putting it on your car’s dashboard too.

Weighing 150g, the Megahouse illuminated speaker system in Rubik’s Cube design will be available by late October for approximately 5,250 Yen ($43).