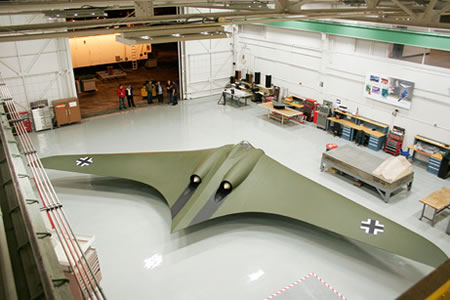 The nearly forgotten Nazi aircraft, the Horten 2-29 has been recreated by top stealth-plane experts. This retro-futuristic fighter plane is recreated as part of a documentary last year to uncover the secrets of the technological advancement of the Nazi forces. Nazi engineers came very close to unleash this radar resistant plane and had it been mass produced, it would have changed the course of the war. The experts have recreated this plane with the sole motive of uncovering these clues and the technology used in it. The team from Northrop Grumman defense-contracting corporation used original Nazi blueprints and the only surviving Ho 2-29, which has been stored in a U.S. government facility for more than 50 years.

The Ho 2-29 looked similar to today’s U.S. B-2 bomber or something straight out of Star Wars with its unique design. The plane was designed to attain a maximum speed of 600 miles an hour and armed with four 30mm cannons and two 500-kilogram (1,100-pound) bombs. A successful test of the Ho 2-29 was made just before Christmas 1944, but it didn’t go into mass production as there was no time for the Nazi’s to perfect the design. Thank god for that! Cause, had this thing made its debut during the world-war, it would have certainly caused a lot of damage.
[NationalGeographic]