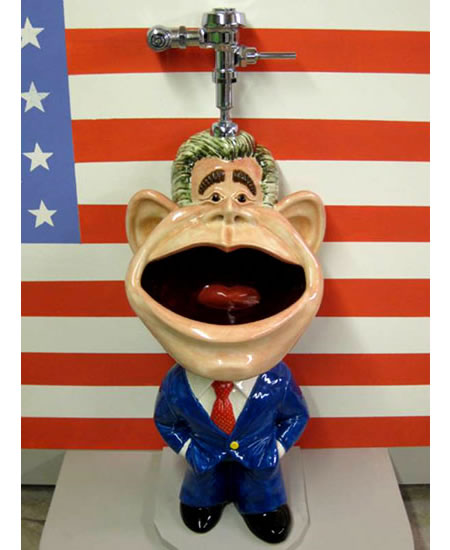 The Presidential Urinal – To piss your goodbyes down the drain

He has the lowest ratings as a President in the past 70 years, is usually heard talking non-sense most of the time. He is none other than George W Bush Jr, he may not last this fortnight, but at least he can go down the drain drinking your genetic waste. This gadget contraption is something Joe the plumber will only be too happy to fix. Sorensen designed the Presidential Toilet in his San Francisco studio to express-piss his appreciation towards the now puppet president who has caused the most harm in the 8 years that he has been in office. Sorensen will also have a one-man show entitled “Down The Drain – The Legacy of George W. Bush.” at Ruby’s Clay Studio and Gallery in San Francisco. The show will run from January 17 to February 16, 2009.
Source