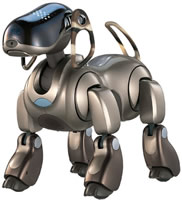 Sony Japan has launched the ERS-7M3 an addition to it’s popular AIBO entertainment robot. It is available in two colors Pearl white and Pearl black. The “ERS-7M3” is much smarter than it’s predecessor it recognises 1000 words. It can read out news and blog entries which are transmitted via RSS. Also included is the “Aibo Photo Diary” which allows easy blogging of pictures. The new Aibo will be available from Spetember 29th in Japan with a limited edition Honey Brown color edition available only till December 1st. The Aibo will cost around 194,250 Yen ($ 1,750).