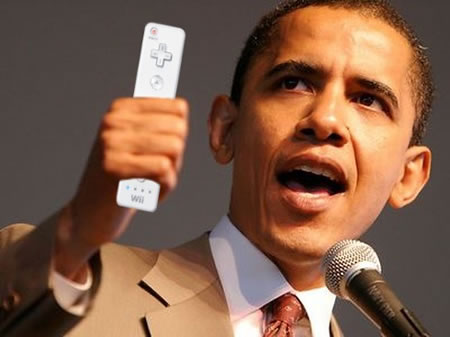 The most powerful gamer in the world

Well it is not a muscle freak from the Guinness book of records who has a knack for gaming but it is President Obama who on January 20 will take office and be the most powerful gamer in the world. Nintendo did give Bush a DS and Brain age some years ago, but I doubt Dubya could handle the challenging Brain age puzzles.
The New York Times reports that the President elect — who even took his campaign to the streets of Burnout Paradise — gifted his daughters, Sasha and Malia, with a Nintendo Wii for Christmas … but the head of the First Family has been playing with it, too. Apparently, Obama has been working on his bowling skills by playing Wii Sports. The President-in-waiting bowled a lowly 37 in the real-life sport while on the campaign trail, but tells the paper that he “performs better in the video game.”
[Joystiq]