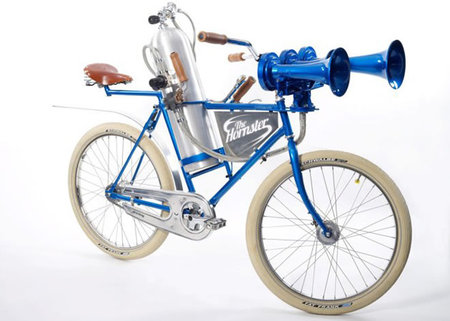 Bicycles are considered as some of the best ways to travel these days, given the fact that these are inexpensive, use no fuel whatsoever and are silent as a dead bug. What we came across, is a bicycle that simply steps away from anything everything you’d expect a conventional bicycle to be. Seriously loud, hurtfully expensive and tremendously uncomfortable to ride around, this bicycle called the Hornster, a name it easily lives up to, comes with a Scuba tank mounted between the handlebars and the seat.

This bicycle, connected to a seriously loud horn capable of emitting sounds at 178db is bound to make people jump right out of their skins and if you’re lucky enough, go deaf! Priced at $8,000, this one’s as ridiculous and unethical as you’d expect a bicycle to be.