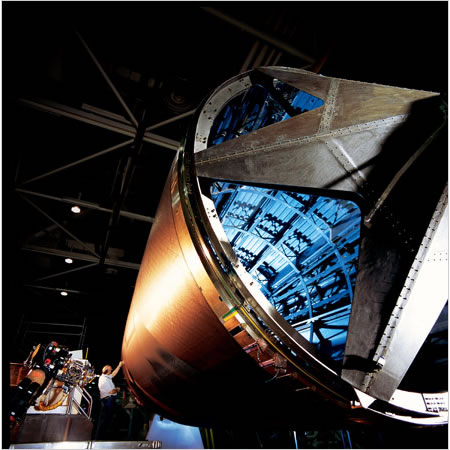 The jet engine is set for an overhaul

Environmental preservation is on the mind of all new manufacturing companies, a big contribution is expected from the new airplanes we may soon travel in. A revolution in jet engines is about to occur, with radically different designs that use gears to cut fuel consumption, noise and pollutants. Moreover, those new engines will power planes built more and more with carbon composite materials, which are lighter and may be safer than the aluminum they replace. In the longer term, the fuel itself may change; scientists are looking for an aviation version of ethanol, something that can be made from plants rather than petroleum. The newest aircraft will also swap out many of the conventional hydraulic systems that control flaps, slats and other parts and replace them with electric motors, saving weight. In addition, new aircraft will use motors to pressurize the cabin for the same reason. The geared jet engine will enter commercial airline service around 2013, if all goes well. So how would a geared jet engine work? In a conventional engine, a big fan sucks air into a combustion chamber, where it is compressed, mixed with fuel and ignited. The expanding gas then blows out the back of the engine, producing thrust that pushes the plane forward. However, before the gas exits, it turns a second set of blades, which is mechanically connected to the fan in the front, to make it turn. The problem, though, is that in current designs the two turn at the same number of revolutions per minute. Nevertheless, the fan in front is bigger, so the blade tips move so fast they are noisy and inefficient. Pratt & Whitney, the engine company based in East Hartford, Conn., is testing an engine with gears arranged so that the fan in front turns at just one-third the speed of the blades in back. The innovation allows the use of a very big fan in the front, which will move more air at a slightly slower speed. “You can either make thrust by moving more air, or taking air and putting more fuel in it, to accelerate the air,” said Robert J. Saia, vice president of Pratt for new engine models. The geared turbofan does the former, he said. In addition, he said, with air moving more slowly, fewer internal parts are needed, and an engine that will produce 15,000 pounds of thrust will weigh about 500 pounds less than a conventional engine of the same power.

Mitsubishi has selected the engine for its new regional jet, and All Nippon Airways has agreed to buy 15 of them. Bombardier, in Montreal, has listed the geared turbofan as a choice for a new line of regional jets it will build. Boeing’s new 787, expected to enter service next year, will be 50 percent composites, by weight, compared with just 12 percent in its last new airplane, the 777, which was certified in 1995.