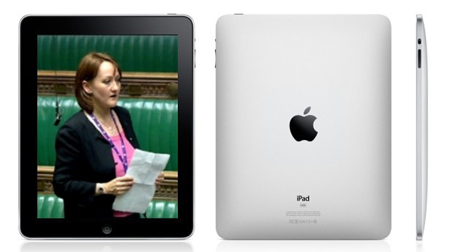 The iPad used to deliver House of Commons speech

Politics was one among the few things that the iPad hadn’t touched, till recently. Following up from the successful application of the world’s favorite tablet, for religion, healthcare, education and even gender issues, the iPad is finally being implemented in the holy political abode we call, the House of Commons. Labor MP Kerry McCarthy delivered a Common’s speech on an iPad, much to the praise of the geeky, technology-driven population of the House. She used the tablet purely out of ‘chance’, rather than a planning its use. It so happens that the use of iPad has been made available uber the new Procedure Committee rules that state that the device has to no bigger than a sheet of A4 paper.

There was a proposal made, not long ago, stating the purpose and usefulness of the iPad. This may fuel or diffuse the effect of proposal, depending on how effectively efficient the MP’s speech was.
Pocket-Lint