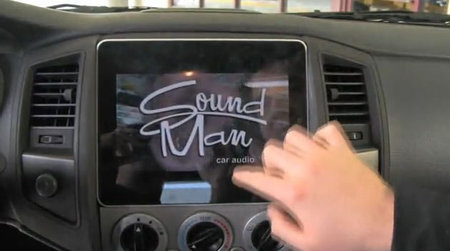 The iPad makes it into your car

Well it really took little time for iPhone applications to come out after the launch but in case of the iPad, this time gap has nearly shrunk to negligible. We’ve come upon the first iPad in-car installation here that’s the work of one Doug Bernards from SoundMan Car Audio in Santa Clarita, California. The installation was done in a Toyota Tacoma pickup. The system also uses an Audison Bit One processor, a 6 channel amplifier from McIntosh, an Onkyo ND-S1 and something that’s supposed to be a ‘special iPod dock which allows the digital signal to be pulled from the iPad and distributed to the BitOne via optical output.’

You can check video from the source to know more about how it works and even more importantly, how it looks.
[Autoblog]