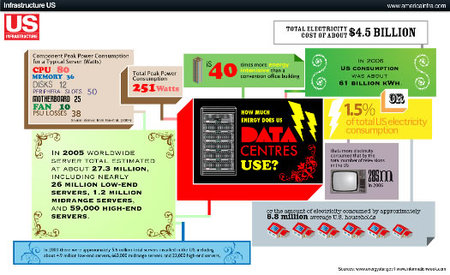 The Internet consumes more energy than you can ever think

Though I work on internet and harp but green living, I am clueless about the current total global energy consumption of the internet. How ignorant of me! But the latest study revealed by US Infrastructure has enlightened me with related facts and figures. We all are aware of the soaring energy prices and the attempts by various governments to reduce their carbon footprints. And since internet is a part of our everyday living, its energy consumption is also under scrutiny. The magazine has explained all the statistics clearly by showing the number of servers in the world, the electricity consumed, and the cost of the power. It is estimated that the amount of energy consumed by data centers and servers has doubled worldwide from 2000-2005. Also the data centers account for 1.5 percent of all electricity consumption in the U.S. Or simply understand that the energy consumed is more than the combined total used by televisions across the country. The electricity to run these servers cost $4.5 billion a year worldwide. The cost can shoot up to $7.2 billion when other factors like cooling measures are accountable. Though it is figured that this energy usage could double again in five years, I believe that green data centers coming up across the globe will bring about some relief.
Via – [Greenlaunches]