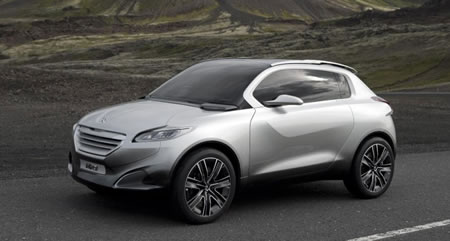 Peugeot’s new HR1 urban concept car which will be seen for the first time when the Paris Motor Show opens on Saturday, was created to “appeal to young city dwellers.” We’ve heard that before, but this time it really does look like they’ve “nailed it!” The styling, scrumptious seats, electric scissor doors to facilitate access in tight spots, a heads-up a “movement recognition” system (allowing the driver to scroll through functions and select settings with hand movements) and a tablet computer which slides into the glovebox and can even share data wirelessly from the driver’s display for the passenger. Isn’t that nice? With just a sweep of your hand from left to right, if you’re driving, you can transfer control of the instrument panel to the passenger. Just like they show in those futuristic sci-fi movies. The tablet industry is quickly gaining ground and hence even car manufacturers don not want to be left behind.

The HR1 comes with electric scissor doors, seriously comfy looking seats all in a rather small but neat looking off-roadish type of design. It’s about 3.67 meters long with short overhangs but seems to have quite a bit of space on the inside. The HR1 can be reconfigured from a four-seater to a three-seater using “stowaway seat” system. Peugeot’s HYbrid4 technology is used in the HR1 with a 1.2 litre, 110 bhp three cylinder, petrol engine driving the front wheels and 37 bhp electric motor driving the rear, so it can be driven in electric mode at urban speeds, or with both engines providing four-wheel drive and freeway power. This car is targeted at the young urban professionals who love their tech and don’t need the hassle of a big car. They haven’t mentioned price yet, but I don’t expect it to be cheap.
Gizmag