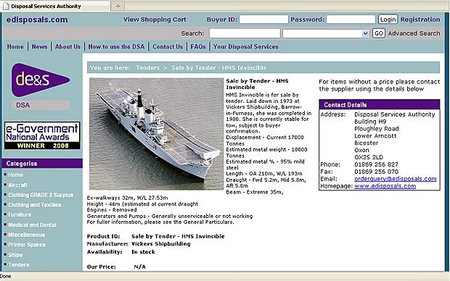 The HMS Invincible goes up for sale

It’s the end of the line for HMS Invincible. After a glorious 32 years of service in the Royal Navy, the aircraft carrier Invincible has been put up for sale on the Disposal Service Authority website listed among old Defence Force equipment, camo pants and ammo boxes. The Ministry of Defense expects to raise £2 million through its sale on edisposals, a government equivalent of eBay. The 17,000 ton vessel served in the Royal Navy from 1973 to 2005, and took part in the Falklands, Balkans and Iraq wars before being decommissioned in 2005. Of her total weight of 17,0000 tons, 10,000 is composed of metal which makes her attractive on the scrap market.

The ship was built at Barrow-in-Furness by Vickers Ship Building and Engineering. Her hull was laid down in 1973 and she joined the fleet on 3rd May 1977. In its heyday the ship was powered by four Rolls-Royce gas turbine engines, could reach a top speed of 28 knots, and had a range of 7,000 nautical miles. It was equipped with up 18 Sea Harrier, four Sea King helicopters and had a ships compliment of 1,050.
Sadly, the Invincible has received no bids yet. In the meantime, you can buy this used carrier at the UK government’s property disposal auction website. Just click on “Add to Cart.”
[Telegraph]