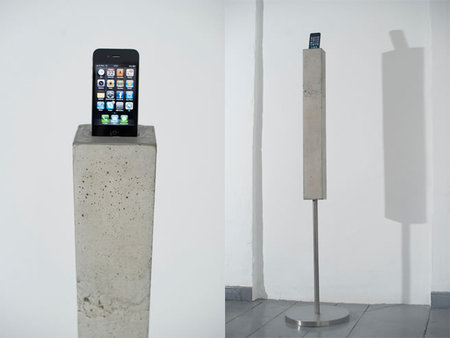 The Heavy Tool Tower, bets way yet to display your beloved iPhone or iPod

iPhone lovers sometimes find the strangest ways to display their favorite piece of technology hardware, especially those fans who happen to be artists. Take for example Maximilian Benedikt von Wallenberg of Berlin, Germany, who, being an artist of the interior design genre has displayed his handset in the weirdest form I’ve seen so far. He calls it his iPhone Tower. In his apartment in Berlin, he’s set his iPhone atop a narrow concrete tower standing on a metal base. An iPhone or iPod can be docked at the top for charging as a cable has been installed within the concrete itself. He calls it the Heavy Tool Tower and while unusual and simplistic in form, I have to admit it does have a certain aesthetic tone to it that I found appealing.