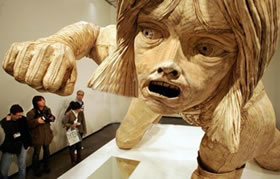 The following is a huge statue of one of the characters from the Japanese anime series “Gundam”—the character “Sayla Mass.” This statue is one of many artworks inspired by the Gundam series. “The Gundam – Generating Futures” exhibition is being held at the Ueno Royal Museum in Tokyo starting November 6 and running to December 25. Twenty-three artists and their works will comprise the exhibition. Map and Access information.