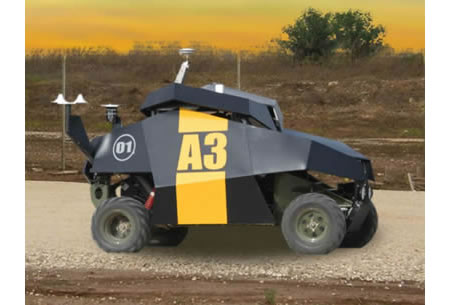 The Guardium – Robocop for real

The Guardium, an unmanned ground vehicle commissioned by the Israeli military, is essentially a robotic soldier, among the first in the world to be operational. It can replace human soldiers in dangerous roles, cutting casualty rates. Like the pilotless drones that have become a mainstay of air forces in Israel, the U.S. and elsewhere, the four-wheeled Guardium is operated from a command room that can be far from the front line. It can be mounted with cameras, night-vision equipment and sensors, as well as more lethal tools like machine guns. Following pre-programmed routes, it can navigate alone through cities — the vehicle knows how to deal with intersections, traffic and road markings. It can patrol borders, its cameras scanning 360 degrees at all times, and alert operators if it spots anything suspicious. The Guardium never mentally wanders or falls asleep, as soldiers have been known to do during mind-numbing guard or patrol missions. And it doesn’t have a family that will miss it when it’s away on reserve duty. The control panel includes two large screens and a joystick. If the operator wants to take control, he can do so from a steering wheel and gas and brake pedals that lends the console the look of a video arcade game. John Pike, director of the Virginia-based military think tank Globalsecurity.org, said there is only one other similar vehicle operational — a South Korean robot used to patrol the demilitarized zone with North Korea. With the details of the Korean vehicle classified, Pike could not say which was more advanced. Robots like this are potentially the future of ground warfare, Pike said.

A robot does what it’s told, and you’ll be able to get them to advance in ways it’s hard to get human soldiers to do. They don’t have fear, and they kill without compunction. A vehicle alone costs approximately $600,000. With the operating system, the price runs to several million dollars, depending on what equipment is installed on the robot.
Source