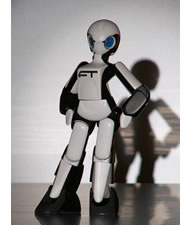 Takahashi-san is known for designing realistic robots. But this time rather than designing a conventional male robot, he decided to design an Attractive and Sexy Female Robot. This attractive bot does much more than standing still, it performs a graceful catwalk with all the twists, turns and poses of a supermodel. Its basic structure is composed of advanced carbon fiber and plastic it is powered by a Lithium Polymer battery. The FT (Female Type) stands 35 cms (14 in) tall and weighs 800 grams (1.8 punds) and is scheduled to go into production this in a year.
Video after the jump