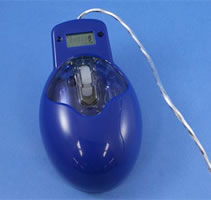 Another whacky USB gadget from Japan, this time a USB Mouse. The blue colored optical mouse has a lcd panel on top of the scroll wheel. The LCD panel protrudes giving the mouse an ugly shape. The LCD panel counts the number of clicks. It display individual clicks such as left click, right click and it is smart enough to distinguish between double clicks and lists them seperately. You can also make out how much your employee has worked by comparing the clicks made in a week, less the clicks less the work that done that day :-).