The Blue Planet Aquarium is a Whirlpool on land

As a well-traveled person, it excites me that new installations and features are being added to many destinations, thus re-visiting them will be renewed pleasure. Something new to a place always adds the allure that beckons you again. Take Dubai for example, after the Palm, the next big thing will be the largest fountains in the world as the centerpiece of Downtown Burj Dubai project to enthrall everyone. Moving a bit to the west, we have the new Copenhagen aquarium getting set to stump you with its contemporary water front architecture. Called ‘The Blue Planet’, the aquarium will open doors in 2013. Danish architects 3XN have designed the place and have been inspired by nature and sea to come up with the ‘Whirlpool’ concept, on which the building is based. Visitors will need to travel to the island of Amager near Copenhagen Airport to access the site, moreover people flying into Copenhagen will be able it view it aerially.

Designing The Blue Planet, the architects team was indeed inspired by nature, says principal of 3XN, Kim Herforth Nielsen. “We wanted to stage a totality of the experience one has visiting an aquarium. The starting point was this magnificent experience of actually watching fish in their element. We wanted to create that adventurous feeling, and we took inspiration in the natural phenomenon of the whirlpool or maelstrom drawing you into the deep. A sculpture at the coast it unites the natural elements of water, air and earth.”
Transporting you to the space between Poseidon and Zeus, this nature inspired aquarium. 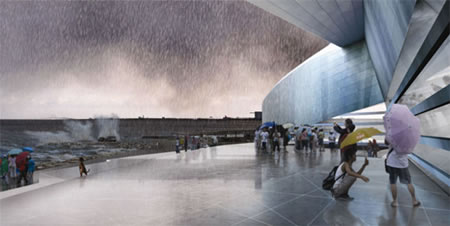