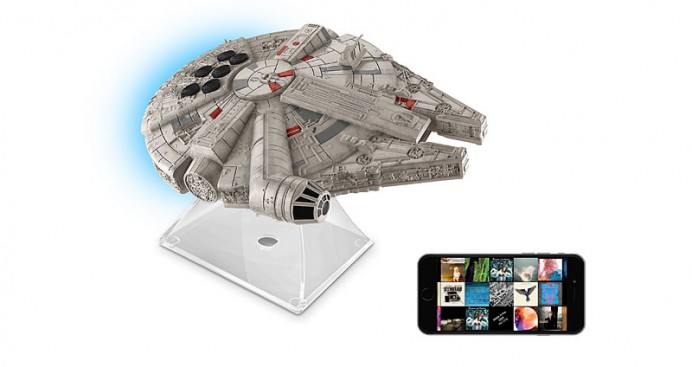 The Star Wars theme is as epic as they come and there’s no better way of listening to that haunting tone as on iHome’s newly unveiled, and totally awesome I might add, Millennium Falcon Bluetooth speaker. In what seems to be a follow up of their earlier Death Star designed Bluetooth speaker, the iHome is cashing in on the Star Wars frenzy as the latest in the series i.e. The Force Awakens, that will be hitting the big screens come December.

The highly detailed Millennium Falcon Bluetooth speaker is about 10 inches in length and functions just like a normal wireless speaker; it can connect to any Bluetooth enabled device to stream audio or be used as a speakerphone for your mobile. With a built in rechargeable battery, the device can go on for about 8 hours at a stretch, and if that isn’t enough to let John Williams’ famous score sink into your brain permanently, I don’t know what is. The range is about 30 feet which is pretty good unless there are walls in your way. The speaker also features a standard 3.5mm jack so you can hook your player up via cable to let the battery run a little longer. The best part is that the speaker also has blue LEDs that light up the rear thrusters for the model which makes the final detailing just about perfect. Now if only they added some sound effects like the “pew, pew” of lasers to the controls, it’d give it 11 on 10.

The Millennium Falcon Bluetooth Speaker from iHome is quite affordable considering its features; with a price tag of $49.99, it includes a very cool looking acrylic stand to mount it on. If the Rebel cause isn’t your thing and you prefer the path of the Dark Side, you could also opt for the Force Awakens Tie Fighter Bluetooth Speaker that’s out and priced at $49.99 as well. It has all the features of the Millennium Flacon speaker but features a red glow around the front to liven things up.

I imagine these are going to be out of stock pretty quick, so you might want to start your Christmas shopping early.