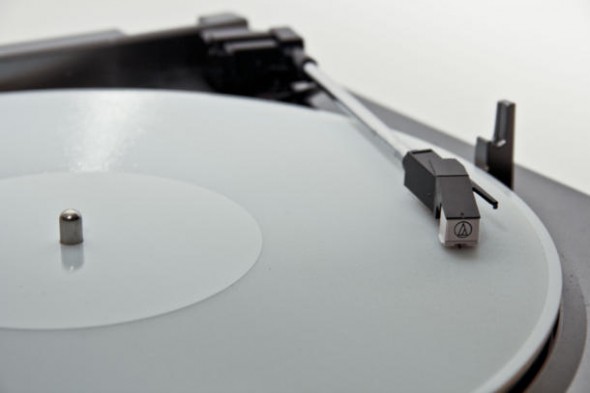 I think we are reaching that era in mankind’s development where we can 3D print anything that the mainstream market doesn’t produce anymore. Just why we’re pleasantly surprised to see and hear about the concept of a 3D-printed vinyl. Amanda Ghassael’s 3D printed records is a DIY project that simply brings back the yesteryear’s to meet the morrow. Amanda laid digital audio files on 3D-printed 33 rpm records, played on a standard turntable. The output sample rate of 11kHz and 5-bit to 6-bit resolution make it all sound old a unclean but classic nonetheless. For a detailed account on Ghassael’s story and adventure, head after a jump.


An excerpt from CNet reveals Amanda’s journey. ‘Ghassaei went to TechShop in San Francisco and created the records on a large-scale Objet Connex500 printer, which has a particularly high 600dpi X and Y resolution and a print layer accuracy of 16 microns. It produced records with grooves that are wider and deeper than factory-made vinyls, so each side can only fit five or six minutes of sound. Check out a video of Ghassaei removing the white resin records from the printer, pizza-style, and scraping off the residue here. She notes that her 3D-printed copy of Daft Punk’s “Around the World” had such a heavy bass sound that it threw the needle off and forced her to revise the conversion algorithm. Meanwhile, you can download her other printed songs like New Order’s “Blue Monday” here. “The Objet still at least an order of magnitude or two away from the resolution of a real vinyl record,” Ghassaei writes. “My hope with this project was that despite the lack of vinyl-quality precision, I would still be able to produce something recognizable by approximating the groove shape as accurately as possible with the tools I had.” Her homespun records are only prototypes and who knows how good they’ll get.’