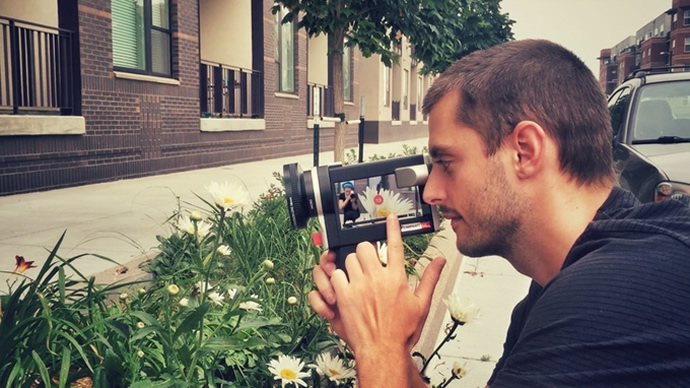 It’s common knowledge that one of the many things Apple got right with their iPhones was the camera; and it’s come a long way since it’s conception, barring the only negative point which is the resolution which doesn’t seem to be getting any higher than 8 megapixels. Enhancements to the famous iSight camera have often come from third party accessory designers who have made taking photos and now making videos on the handset, an art form.

Company’s like these guys, who are reviving an old-school design i.e. the Super 8 video camera, have created a case for the iPhone 6 that turns your “ordinary” Apple Smartphone into a very cool retro looking video camera; enter the Luminati CS1 iPhone 6 case.

This ambitious kickstarter campaign is looking at finding support from the masses and is aiming at reaching its $75,000 goal fast enough to start mass producing the device. The iPhone 6 handset fits into the case much like a video cartridge would on the original camera. The case features what looks like a very comfortable handle complete with trigger, a mount for mics and lights is also available, a viewfinder to add a classic touch to the camera and of course cinematic lenses. The design is quite ergonomic in styling as it’s positioned to block the sun and comfortably view what the camera is aimed at using a built-in mirror system. The corresponding app gives the user quite a bit of creative control while filming.

The idea behind the case was to try and discourage video-makers from what the designers refer to as “the dreaded vertical video”. As of now the Luminati CS1 is priced at just $150 (pledge) on Kickstarter and ships with a case that includes a wide angle lens. $220 will have telescopic lens added into the kit and more lenses with higher pledges. Unfortunately you’ll have to wait till Feb 2016 to receive the device. Personally, I think it’s a brilliant concept so I have just this to say… Shut up and take my money!