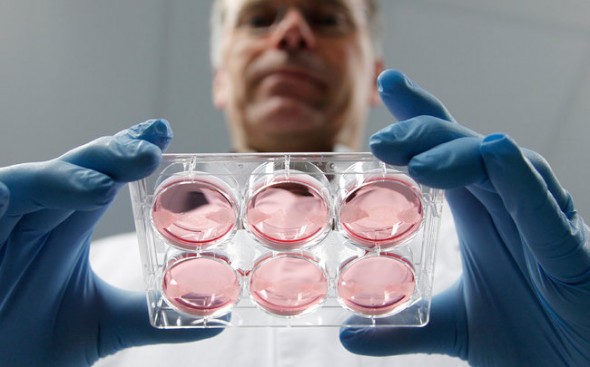 Test-Tube burger, no longer a myth

Ever fathomed eating a test-tube burger? It might have sure been a passing thought, or an idea sometime mentioned over conversations that centered around technological advancements. Well, exciting or not, it a tale that’s on the verge of turning into reality! One that Dr. Mark Post from Maastricht University, Netherlands has made possible through his painstaking research that cost his around $3,25,000. The meat cultured by Dr. Post is soon to be cooked and served at an event in London, where only a select few would taste the test-tube creation.


Dr. Mark Post who has been researching on tissue engineering, finally hit bullseye, creating cultured, edible meat with tiny bits of beef muscle tissue grown in the laboratory. The meat consists of 20,000 thin strips of meat tissue, which has been grown from stem cells of a slaughterhouse cow. Well, its but natural that the idea doesn’t come by to us as that attractive, and yes, we expect controversies to flare up. However, Dr. Post says he is well-aware of the obstacles that would come along, nonetheless he is excited and geared about his success. Post says, “I see the major hurdles, probably better than anybody else, but you need to keep faith in technological advancements, that they will be solved”. Its true that the cost of in-vitro meat would come down significantly, but Dr. Post says there are still hurdles that need to be attended to before the meat let on for mass production. This confirms that its still a long shot for the in-vitro meat to reach markets and share the dais with real meat. Yeah sure take your time, whatever the result is, we would surely like tags put up distinguishing the meat!