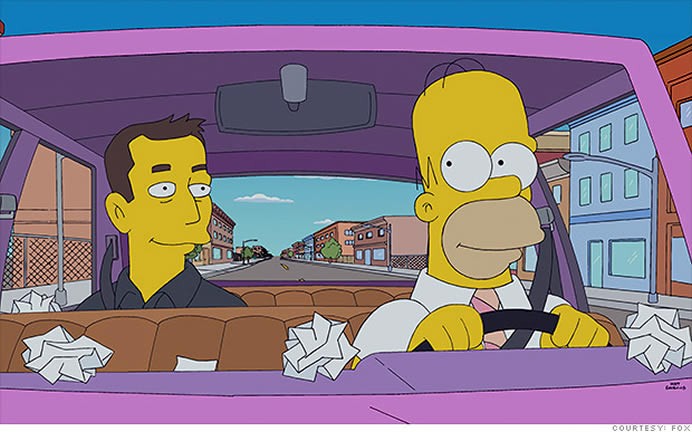 Sooner or later all famous people make it to the colorful town of Springfield and find their way into the lives of one TV’s zaniest dysfunctional families i.e. The Simpsons. In the latest episode, the newest celebrity to make their way into the animated world of yellow people is Elon Musk; inventor, genius, and the man behind Tesla Motors, amongst other major roles that he plays in the real world.

The episode titled “The Musk that Fell to Earth,” actually features Musk in a starring role along with the Simpsons after his space craft lands in their backyard. Lisa, the brainy young Simpson, refers to him as “possibly the greatest living inventor” and the guy whose electric cars “changed the way Hollywood drives.” Of course Homer doesn’t ever stray away from an opportunity to pass along his vast expanse of “knowledge” and to a Musk, who’s suffering from inventor’s block on the show, Homer’s irrational and outrageous ideologies and thoughts seem inspired. If you’re a fan of the show, it’s quite clichéd. Naturally things don’t work out too well, especially since Musk ends up trying to build something future-thought that Home Simpson’s brain inspired, so the citizen’s of Springfield pay the price.

It just goes to show, no one is above the invitation to feature on the Simpsons even if it means that their inventions will destroy the very town the family and their oddball friends reside in. It’s been done before so Musk isn’t really the first to wreck havoc on the little town nor is he immune to the irrefutable black hole that is Homer Simpson’s charm.