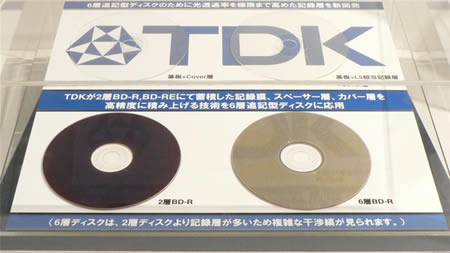 We had earlier reported on TDK developing a six layer Blu-Ray disc with a capacity of 200GB almost 4 times than the current 50GB dual layer disc. TDK has managed to increase the layer capacity from 25GB to 33GB and by adding six layers the disc packs in 200GB of storage. Though still in development stage it has still a long way to go before you can pop it in your BD recorder. But getting approval from the BDA (Blu-Ray disc association) will be a major issue for TDK. In addition to this 8 cm wide mini BD-R and BD-RE discs were displayed at the BDA stall in Ceatec. The mini discs will be used in future hi-def camcorders which support Blu-Ray media. The 8 cm wide disc will have a capacity of 16.5 GB (2/3 of current 25GB single layer discs). Dual layer mini discs with 33GB capacity might also be unveiled in the near future.
(Pic of mini Blu-Ray discs after the jump)