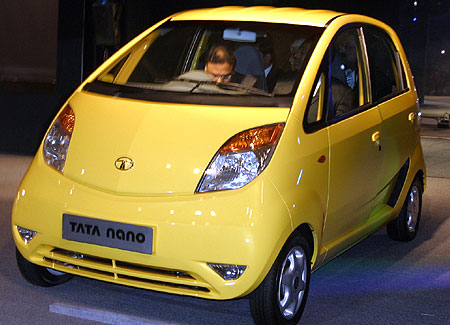 Tata has finally unveiled the much awaited $2500 People’s car at the New Delhi Auto Expo. The Tata Nano is powered by a 2 cylinder 624-cc engine which churns out a minuscule 33 horsepower while giving around 54 miles to the gallon. Tata claims the car meets all the safety and environmental standards. It has air conditioning but lacks a power steering and the dashboard just has a speedometer, fuel gauge and an oil light. Nano will also have a 30-litre fuel tank, four-speed manual gearshift, front disk and rear drum brakes. The market for Tata Nano is huge in India where consumers bought seven million two-wheelers last year priced at around $1200 – 1500. Waiting in line to tap the huge market is Bajaj with a $2750 car as well as Renault and Nissan looking into the feasibility of a $3000 car.

Tata Motors is also the frontrunner in the bid for Rover and Jaguar. So the same guys who made the $2500 car will be selling you a $125,000 Jaguar.