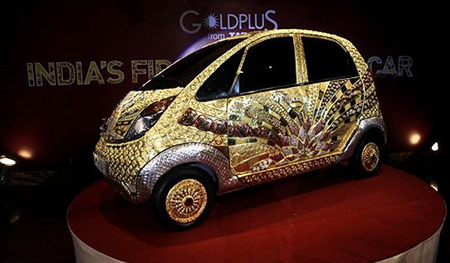 When we first heard about the Tata Nano, we knew that the $2500 price range was something to go by. It was a hit to some degree in India, where it launched, and then went on to be a part of some famous combustion accidents. That’s just about all that the car was known for. Now, however, we see that this isn’t the case anymore since this particular since Goldplus Jewelry, a company within the Tata Group itself, has managed to stud the car with some gold, silver and precious stones, thus taking its value over the rooftop, for a mere promotional activity. It is symbolic for the jewelry industry in India that turns 5,000 years old. Specifications: ‘ 80 kg 22 carat solid gold, 15 kg silver, precious stones – including diamonds, rubies – and other expensive gemstones’. Video after the jump.

This version of the Tata Nano takes it to the astronomical figure of $4.6 million! How about that for an honor, for the nation’s cheapest car?
TechOnShow