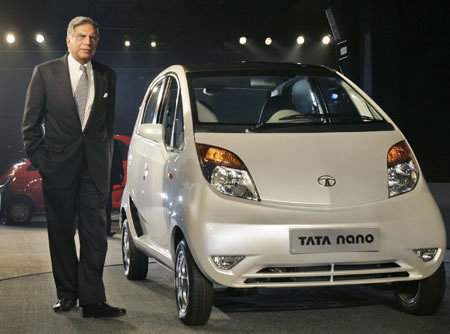 Indian car maker Tata Motors, which is planning to produce the world’s cheapest car selling at 1,700 euros ($2,600), also has plans to produce an electric-drive version, according to a German press report. The E-Nano would be built in cooperation with the Norwegian electric car specialist firm Miljoebil Grenland, the Hamburg-based Auto Bild newspaper said. The Tata Nano is a small car aimed at the mass Indian market and is set to go on sale later this year. However, industry analysts have expressed skepticism that Tata will be able to sell the vehicle at the price because of rising raw material prices. The Nano is a no-frills basic car with a 33 hp 623 cc engine. It has no air-conditioning, electric windows or power steering that are standard in modern new cars.
(Pictured is the Tata Nano at the Delhi auto show)