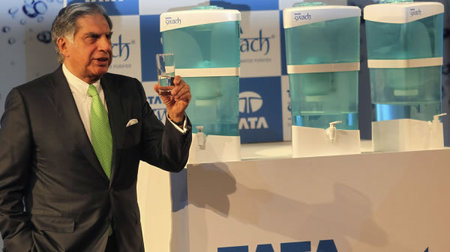 How long would it be before Tata could take before they bought out the next ‘world’s cheapest’ product. Following the huge response from the ‘Nano’ which still stands as the world’s cheapest car, the company has rolled out a cool water purifier that costs barely half as much as some of the most common ones we have on the shelves these days. The company aims at selling 1,000,000 units of this one and surely, this isn’t a remote impossibility. Called the Tata ‘Swachh’ (which means ‘Pure’ in Hindi), this water purifier is mainly aimed at those who still face the brunt of impure water supply and those who find a reason to complain about the consumption of fuel and gas to boil water. This one purifies water without needing any kind of power supply, boiling or running water and also complies with US Environmental Protection Agency standards.