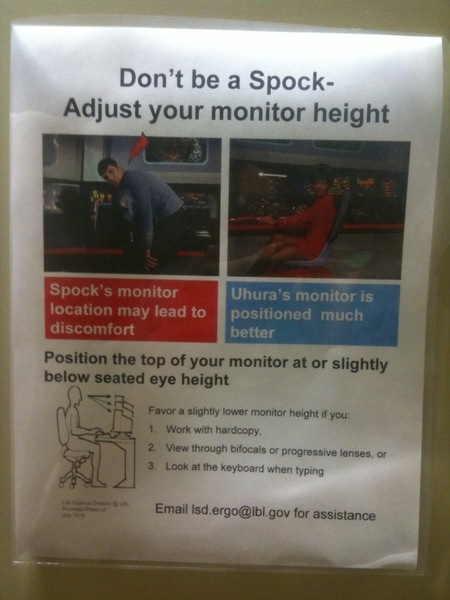 Now we know that Spock wasn’t really the one who would give a rats ass about how his monitor’s placed. In fact he’d do anything that the director of Star Trek would tell him to do and monitor positioning wasn’t in his agenda. However, Uhura was wise and managed the monitor at an appropriate height. This seems to be the driving force behind the folks at Lawrence Berkeley National Laboratory to encourage their members to take ergonomics seriously. The poster you see here was pasted in the bathroom of the facility.

Taking a leak can be a redeeming time and well, may be someone will learn a lesson or two as they rid themselves of unwanted body fluids.
So if you’ve been tripping on Uhura’s charm from the last few years then you’d like to adopt the ergonomics she’d keep up with as well.
[Wired]