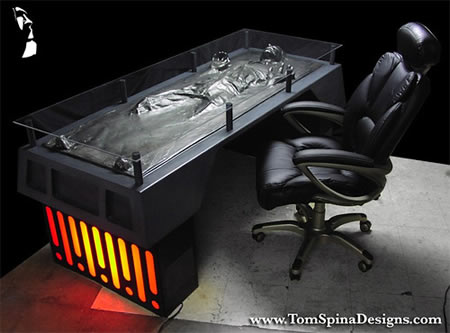 Anyone who’s anyone who’s a Star Wars fan will know that from way back when the first movie hit us, it was all about owning the merchandise. Of course it was a little different as kids but adult sci-fi fans also took to the malls and stores in search of the toys and action figures of those famous space adventurers. Although I may be a big fan with plenty of memorabilia of my own, like many others, I have to agree, there’s always room for more and I’m at that point when scale models won’t always do. So when you see something like the life size ‘Han Solo frozen in carbonite’ (Return of the Jedi) desk, it’s something to seriously covet.

Designed by Tom Spina Designs, the detailing one can see from the picture looks quite good. From the figure encased in the carbonite chamber to the casing it’s in with lights etc. It’s a one of a kind design, is what they’re saying and may not be officially tied to the Star Wars franchise’s merchandising section. I’m not too sure how comfortable it would be having a discussion across this table without every conversation deviating to a Star Wars anecdote but, wouldn’t you like to have this anyways?
OhGizmo