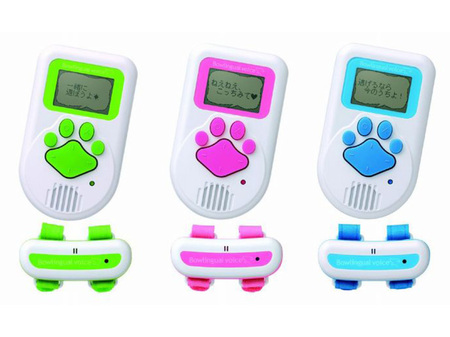 TakaraTomy Dog translator – You will finally know if Fluffy like Pedigree

Japanese toy maker TakaraTomy has announced an upgrade to the Bowlingual. A device which was released in the early 2000’s and claimed to translate the dog barks and emotions for you. Just place the microphone on Fluffy’s collar and BowLingual Voice will speak on your dog’s behalf. It has a vocabulary of 100 words, male and female voice and a LCD display which shows your best friends emotion. Unfortunately Bowlingual currently supports only Japanese. Tomy will surely have a English version in the pipeline to satisfy dog owners worldwide. Bowlingual will come in three colors and hit stores in August 27 for 19,950 Yen ($ 220).
(Video after the jump)