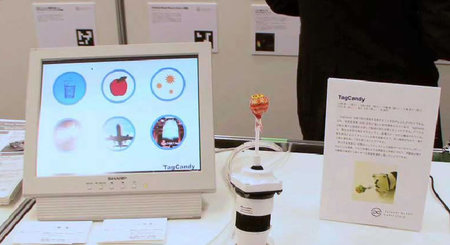 TagCandy Can Create Fireworks and Airplane Sensations in Your Mouth

Augmented reality has been nothing less than a boon to the mankind. But Keio University’s Yasuaki Kakehi Laboratory managed to put some fun application of this mediated reality. Hailed as TagCandy-Variable Candy Sensations Using Augmented Reality, this technology lets one feel various sensations produced by an ordinary candy inserted into the device. You got to suck it and using AR, the device produces fizzy soda, crisp apple and even fireworks sensation.

A sensor in this system detects the action of a person putting his mouth to the candy. It then conveys this action to the vibration speaker and so when you touch your tongue to it, you’ll get a sensation. Similarly your teeth to it, you will hear a sound through bone conduction. This way a combination of sound and tongue sensations gives you the illusion of fizzy soda or fireworks in your mouth.
TagCandy has been well applauded by people who tried it. The developers are also working on creating candy sensations which could be downloaded.So in future once you buy this device, you can avail a variety of sensations from the Internet. It’s kind of similar to the concept of apps used on phones. Forget kids, even adults would have a gala time around a gadget like this.
[DigitalInfo]