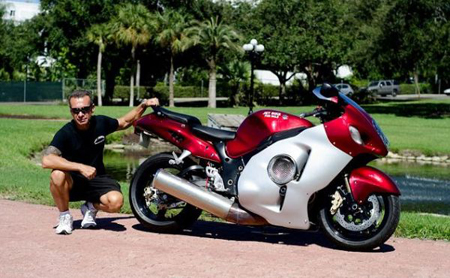 The Suzuki Hayabusa superbike is a known asphalt scorcher. With a stock 1340cc engine, this bike is capable of hitting speeds up to 200mph. however, all this seemed just too measly for Tony Pandolfo from Orlando, Florida. So, he split open his Hayabusa, pulled the engine out, and tossed in an AlliedSignal jet fuel starter (JFS) from a F-14 jet fighter instead! Now we wouldn’t need to specify that this Hayabusa is seriously loud. With the JFS drinking K2 Kerosene or Jet A fuel, no official performance specs have been mentioned, besides a peak torque of 300 lb-ft! Also, besides spitting flames and blasting eardrums, a bike with a jet engine rumbling inside wouldn’t require a rocket scientist at its controls, and from the looks of the video, this Hayabusa’s pretty easy to ride away on!