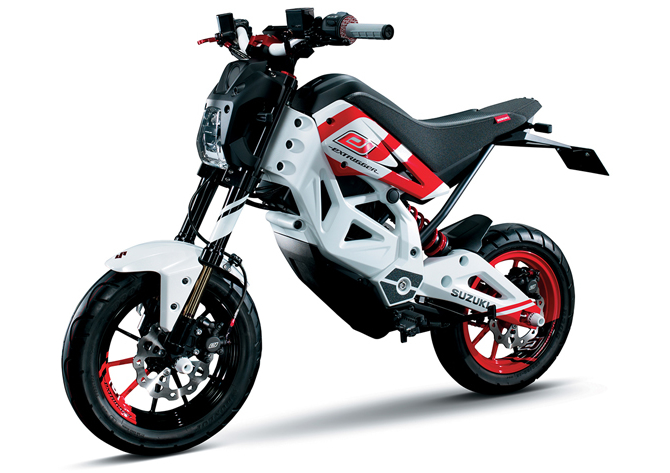 Off-road vehicles are known to blast ear-drums and screech and scream as you ride up and down terribly rough terrain. Suzuki thinks otherwise. The Japanese vehicle manufacturer, known for its technological developments and fantastic rides, has unveiled a silent-as-a-cat’s-paw electric motorcycle. Called the Extrigger, this extreme off-road concept comes packed with years of motorcycle-production legacy, inverted forks, a chunky aluminum swing arm, and wavy disc brakes! Simply put, this one performs just as well as it looks! Inside its well-sculpted frame, the Extrigger packs an electric motor and a lithium-ion battery pack.


The Extrigger uses a drivetrain derived from the Suzuki eLet’s electric scooter and is reported to boast a range of 20 miles and a maximum speed of 20 mph. This might not seem as attractive as your average gas-guzzling dirt-bike that does manage to make the small hairs on your back stand up straight every time you accelerate, though this bike does offer something a little more instead, a clean and noise-free ride! In the long-run, owning and using a bike as such also proves to be a lot less expensive, with electricity being a cheaper means to power up this bike and with lowered maintenance costs. The Extrigger will be debuting at the Tokyo Motor Show next month.