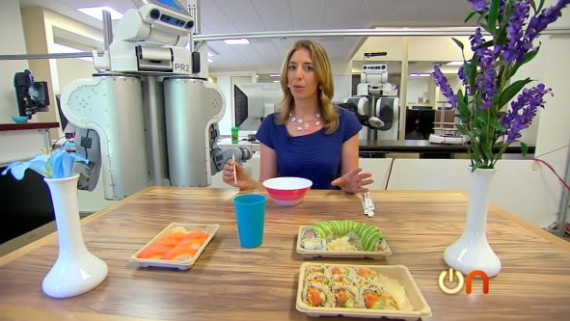 Most of you out there should be familiar with Willow Garage’s open-source PR2 robot by now but for those who aren’t, it’s slightly lesser than the human servant at home. Always On Future Tech host Molly Wood wanted a closer look to see how PR2 fares with its tasks, so she tripped down to Willow Garage in Menlo Park, California. The robot maid decked in with array of sensors made its first video appearance unperturbed and was autonomously folding towels and scooping dog poop with ease.


The robot maid efficiently lays out the table with chopsticks, flowers etc, but not as quickly as some regular waiter. By the time PR2 lays the table the sushi isn’t as fresh as you’d want but this is just the beginning, we are slowly but steadily heading towards the future when robots will take control of our house chores and then our lives.