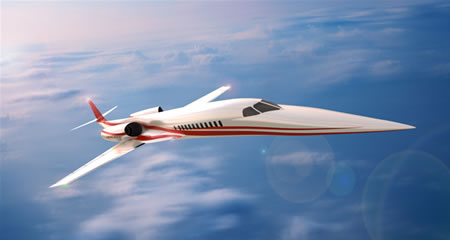 On one hand you have dreamers wanting to build slow moving luxury airplanes like the Manned Cloud; and on the other hand the super sonic jet industry is gearing to take off where the Concorde and the likes left it. Picking up the pieces after the Concorde era crumbled has been difficult for the jet setters. Time is money; time is precious, no wonder we are seeing a boom in the Supersonic Business Jets industry. Passenger crafts like the Airbus A380 and Boeing 787 holds no candle to supersonic business jets when the demands made by a busy executive (with lots of money) are to be considered. Flagging economies has not deterred the private jet travel industry, if nothing else the demand seems to be increasing. Gulfstream’s G-650 (due to arrive in 2012) has already got buyers queuing up with the $58.5 million for the fastest business jet in the skies. Presently there are at least 3 major supersonic business jets under development. Reno, Nevada-based Aerion Corporation is coming out with a 8 passenger model which the company say will have a top speed of Mach 1.6 and a range of over 4,600 miles. With a target price of $80 million, orders worth over $3 billion have already been placed. Lastly, The Quiet Supersonic Transport (QSST), being developed by Lockheed’s Skunkworks division under contract from Supersonic Aerospace International, is slated to have a top speed of Mach 1.8 and features an innovative gull-wing design. Cessna too has entered the league but its plans are undisclosed as of now.

The problem with the supersonic technology is the boom noise that occurs when the craft breaks the sound barrier. The QSST is said to feature technology, which can take the edge off the effects of a sonic boom. The QSST design features an airframe whose subtle curves break up the wave of pressure that generates a sonic boom as a plane passes the speed of sound. The net effect is that instead of creating two echoing booms thundering across the land, the plane passes through a series of mini-booms imperceptible on the ground. The Aerion SBJ states that its jet’s wing and airframe design softens sonic booms enough so that they are inaudible on the ground when the plane flies below Mach 1.2. United States laws prevent planes from traveling faster than Mach 1, so the plane will be able to cruise just below the speed of sound.
Besides many ambitious projects being shelved in the past, the other thing that bogs down the super sonic jet industry is rising fuel costs and operation costs. Will it make enough business sense to spend huge amounts of money on jet-fuel? Environmental concerns also linger in the minds of people; there is evidence to suggest that planes flying at the high altitude preferred for supersonic travel cause more direct damage to the ozone layer, and the higher burn rate naturally means more emissions in general.
Via – Luxurylaunches