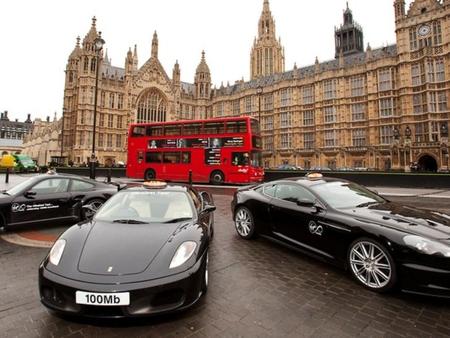 Ever fancied zipping around England’s capital in a sports car? Well, here’s your chance. Virgin Media is celebrating the announcement of its 100Mb/s broadband with a fleet of supercar taxis. Want to flip round London in a Ferrari? How about popping down to Big Ben in a Porsche? Or mooching over to Marble Arch in an Aston Martin? Jon James, executive director of Broadband at Virgin Media said the idea is for members of the British public to “get a taste of life in the fast lane courtesy of Virgin Media”. He obviously hasn’t driven around central London – there’s certainly nothing fast or glamourous about peak hour traffic.

The Porsche 997 Turbo Gen 1, Ferrari 430 F1 Coupe and Aston Martin DBS will be available free of charge next Thursday between 10am and 4pm.
[Techradar]