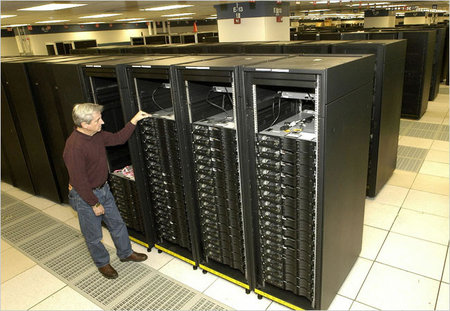 Its been assembled from components originally designed for video game machines, but this American military supercomputer Roadrunner, has achieved what most computers desire… processing more than 1.026 quadrillion calculations per second.The new machine is more than twice as fast as the previous fastest supercomputer, the IBM BlueGene/L, which is based at Lawrence Livermore National Laboratory in California.

Roadrunner, the new $133 million supercomputer was devised and built by engineers and scientists at IBM and Los Alamos National Laboratory, based in Los Alamos, New Mexico. It’s main function will be to solve classified military problems to ensure that the nation’s stockpile of nuclear weapons will continue to work correctly as they age. The Roadrunner will simulate the behavior of the weapons in the first fraction of a second during an explosion. It will also be used to explore scientific problems like climate change. To understand it’s working better imagine if all six billion people on earth used hand calculators and performed calculations 24 hours a day and seven days a week, it would take them 46 years to do what the Roadrunner can in one day.
Source