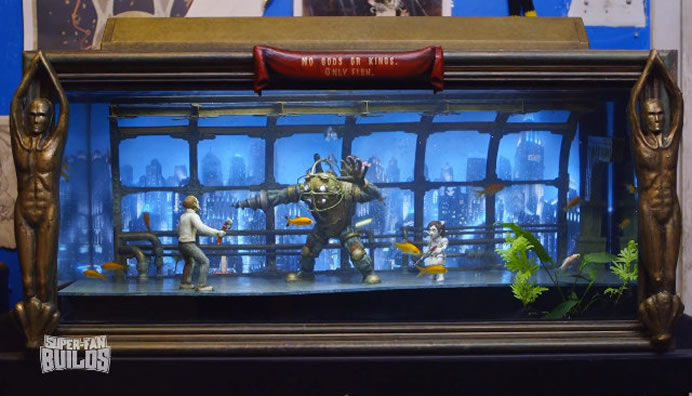 BioShock is one of the most popular Xbox 360 game till date and its fans are many. If you are one of the fans, then you might be delighted to see an aquarium which has fishes (obviously), Big Daddy and also Little Sister. The Fish Tank exactly looks like underwater city of Rapture, you might also see some objects designed as gifts. The aquarium has been made by Super-Fan Builds which constructs items based on the video games, movies, and comics as a gift for a especially dedicated fan. The aquarium has been made for a passionate (or obsessed?) BioShock fan Courtney King. A tiny fragment of the massive BioShock’s Rapture has been enveloped in the aquarium; a fight between Big Daddy and Jack has been shown in the tunnels. The aquarium stands out because of the spectacular sculptures and the detailing. The Rapture also has a new Logo! – “No Gods or Kings. Only Fish.”

We are not really a BioShock fan, but we are sure thinking of writing to Super Fan Builds to bring our favourite game into reality. What’s yours favourite game?